A few weeks ago, Milena from Eclipse lingerie studio launched a book about lingerie sewing. It’s very complete and contains everything you need to sew yourself a full lingerie wardrobe, from a simple triangle bralette to high-waisted panties, including a sports bra and an underwired bra. And on top of it all (as if it wasn’t already enough), the pictures are great, far from the “traditional” lingerie pictures, but with real people’s bodies (and it feels good). To be honest, I didn’t hesitate very long to decide which model I was going to start with… The underwire bra of course! And I figured this would be the perfect opportunity to document my fitting process a bit and share my journey and iterations with you.

The underwired bra from the book Mon Atelier Lingerie is a pretty classic bra. It features a 3-piece cup: one top cup piece, an inner bottom cup piece and an outer bottom cup piece. The cup has 2 seams, one horizontal and one vertical, which allows to have both a good support and a nice shape. The frame has a rather unusual cut (usually the cut between the bridge and the outer frame is placed in the middle, under the cup, which is not the case here) but I find it very nice. It is a bra that I would put in the ‘everyday’ category because it is quite covering, but not too much either, but personally I find it very comfortable.

It comes in 2 versions: basic and with a lace overlay. All the instructions are given in the book as to the amount of elastic, the materials to choose and the fitting instructions. I think this is a good pattern to start sewing underwired bras.

Well obviously, trying out a new pattern means muslin. Or should I say muslins. I started by taking a look at the measurement chart but as it happens (FYI it’s a french measurement system), I don’t fit into it:

OK, so to recap: I have the back size, the underwire size, but the cup will probably be too small for me. This is a recurring problem with me, I often need deeper cups than the sizing charts call for. So I went with the size 100E: the size that matches back size and my underwire size.

That’s where I could actually ask myself: can’t this problem be solved by simply taking a bigger cup size? 100F in my case?

In theory yes, I could, but it’s not that simple.

If the back size is good, and the underwire size fits you, going up a size will not solve the problem: OK maybe the cups will be good, but you will also have to go up a size in the underwire, and you might end up with an uncomfortable bra. And I’ve found my underwire size that works for me, so I don’t want to change it.

In these cases you have several ways to go:

In the case of the bra in the book, I already have the largest possible cup size, E, so it’s impossible to do method 1. So I went with method 2.

I decided to start with a first muslin using size 100E, as is, without changing anything from the pattern. For this I used fabrics from a [BWear] kit (https://www.bwear.se/): in duoplex (which is a stable fabric, but with some mechanical give in the bias, perfect for a bra muslin), the back in powernet, the straps in ribbon, no elastic, no frame cover. My muslin is very basic, the idea is to go as fast as possible by eliminating unnecessary steps. For example, I don’t use an underwire cover, I make an extra seam in the seam allowance of the cups: it creates a little tunnel in which I can insert the wires. And that’s good enough!

So I sewed my muslin, and the verdict was what I expected: the cups are too small. Okay, so let’s at least check that the band is the right size.

At this point, I cut into my cups. A large opening in the cup without cutting them all the way to the top (to keep a pivot point). In fact, it’s a bit like an FBA in garment sewing: you cut, you try it on, and you measure the width of the opening between the 2 sides of the cup. This is the amount you need to add to the cup pieces. This step allowed me to identify that I needed to add 1.2 cm to each cup.

For this second attempt, I identified that I needed to add 1.2 cm width to each cup. I did this in several steps. Before starting to alter everything, I drew all my seam allowances on the pieces. I also decided to add these 1.2 cm spread over 3 axis: the more you spread, the less you deform the piece (at least, in my experience). And then 1.2 is well divided by 3.

First, the bottom of the cup: I superposed the 2 bottom pieces to create a single piece, I find it’s easier to adjust like that.

I cut along these 3 axis until I reached the middle of the bottom cup (I didn’t cut the bottom seam allowance to keep a pivot point)(and I want to keep my underwire size so we don’t want to add length there). And here I put my cut piece on another piece of paper, and taped so that each axis is 0.4cm apart at the top of the cup.

After that I split my piece in 2 again and redraw my 2 new pieces on tracing paper.

Then, to the top of the cup: same thing, I marked 3 notches on the seam bottom seam line of the top cup piece (trying to make sure they match the notches on the bottom cup piece), and I marked the middle of the top of the cup. I have to say that I kind of eyeballed the notches placement: it doesn’t need to be exact, just roughly evenly distributed. And again: I cut along these 3 axis, and taped the cut piece to another piece of paper, spreading the edges so that the gap was 0.4cm. And I re-drew the new top cup piece.

For my second muslin, I simply cut 2 new cups, removed the old ones from the cradle and sewed the new ones onto it.

I tried it out and bingo! We were good. So I was able to move on to my first (hopefully) wearable version. (Yaaaay!)

The fabrics and notions

For this version, I immediately decided to try the lace version. So I used:

And since I didn’t have a fold-over elastic for the top of the cup (that’s the finishes the pattern calls for), I used a picot elastic from Charlotte Jaubert (I added the proper seam allowances beforhand, of course).

As for the other notions, the straps, the closure, I used stuff from my stash, and I no longer know the source… Probably a mix of supplies from Emerald Erin, BWear, Small Bobbins.

I also used BWear underwires: they are the Extra Long size 42.

I followed the instructions exactly and everything was perfect. The only modification I made was to put the adjusters on the front instead of the back. This is a personal preference, I find it more practical. But other than that, everything went very well. Everything is clean inside with the seams enclosed, everything is beautiful.

First fitting: well this bra is clearly more than wearable! The bridge lies flat, no spilling in sight. I really like the fact that the bra is rounded at the bottom, I find it very very comfortable. I’m really happy with this first version, and I really like the look of the green lace on the beige tulle. The only thing that needs to be changed is to move the straps a bit towards the center, they are a bit too far apart for me. No problem, that’s an easy alteration! I then went for a second wearable version.

For this version, I moved the straps 0.7 cm towards the center. All the info to make this modification is in the book, but it’s really simple:

The fabrics and notions

For this version, I also used the lace variation of the pattern. I used:

And this time I went with fold-over elastic to finish the cups.

As for the other notions, I used elastics from a BWear kit.

I used underwires from Je fais mes dessous: they are basic underwires 2 in size 115. It’s the first time I used these underwires, and I have to say that they are more flexible than my usual underwires (from BWear or Emerald Erin). I find them too flimsy, and I don’t like them as much when I wear them… But that’s a matter of personal preference.

Same as the previous version, nothing to say here.

Well, I think I have my final version of this pattern. It’s comfortable, it gives me a nice shape, it fits well and the straps are well placed. For me this is really what bra sewing is all about: tackling problems, one after the other, until you get the perfect result. As far as I’m concerned, I find the pattern in the book very good. It allows you to get simple and basic bras for everyday wear but also more sophisticated variations with lace appliqués. And the cradle is really comfortable! The only small downside I found is that I would have liked to have the seam allowances drawn on the patterns rather than having to go and find them in the instructions to draw them myself. As someone who often has alterations to make, I find it tedious to go looking for them to add them to my pattern pieces… But apart from that, I really like it, and I think these 2 bras won’t be the last…

I hope this article gives you some pointers on bra fitting. I’d love to write more bra sewing tips and pattern modification articles…. I’ll try to make the time! If you’re looking for more references on lingerie sewing and specifically fitting, here are my main sources of references: 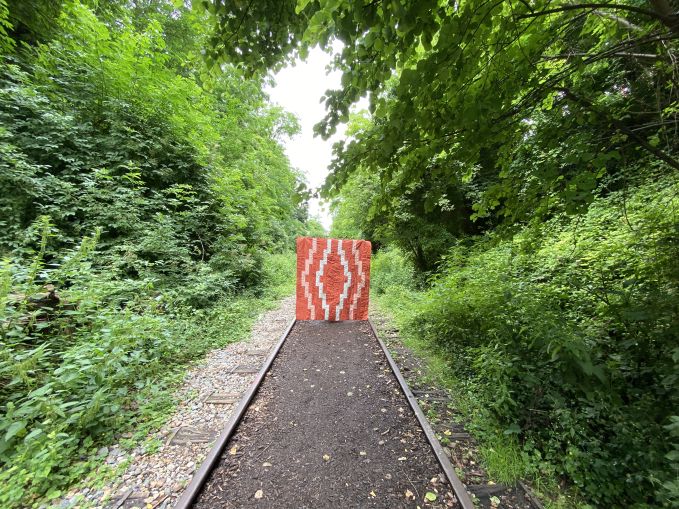 For once on this blog, we are going to talk about a home project ! I discovered quilting not long ago. In my head, quilting was kind of old-fashioned. Quilts were the kind of items you would find in an old family house, dusty, stained and made with weird scraps of flowery fabrics and bedsheets... But I discovered that there was really something else to it, and you could whip up some gorgeous, modern quilts! With really strong graphic vibes, and that's what I went for!. 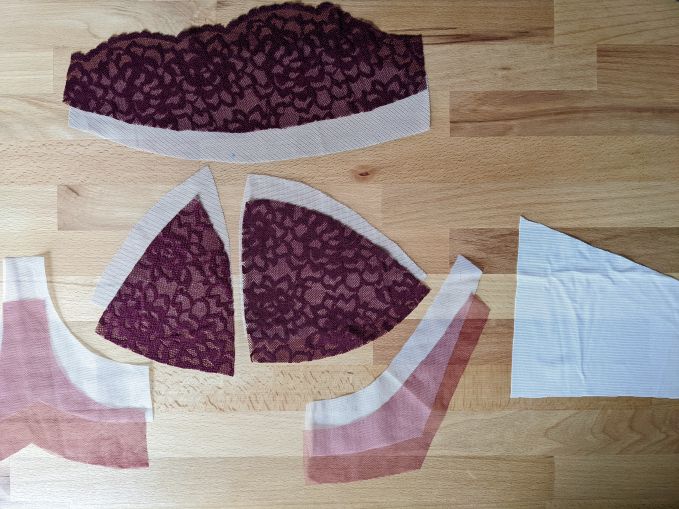 Sewing a bra can be scary. I know a lot of people who are afraid to try because they're intimidated. That's the reason why I'll try with this series of blog posts to divide it into sizeable chunks that will make the whole process less scary for you.